The truth is whenever two or more people get together, conflict will happen, sooner or later, either openly or concealed. In a dynamic team, conflict is a normal part of the team’s activity and is a healthy sign. It creates learning and development opportunities. If a team has no conflict, it might be a sign of a problem. A team without conflict might be suffering from unhealthy agreements, have a domineering leader who suppresses all conflict and debate, or be performing its task in a routine manner without challenging the status quo for improvement. Teams often do not handle their conflicts very well. Sometimes, rather than trying to manage their conflicts, they try to ignore or avoid them. This is called “defensive avoidance”. To avoid a conflict, everyone becomes quiet when a controversy occurs. Team members accept what the leader says in order to avoid conflict. The consequences are poor decision making and more problems later in the group’s life.

Whether conflict has a beneficial or detrimental effect on a work team depends on the type of conflict and the team’s task. Relationship conflicts have a negative effect on team member satisfaction and team performance, but the effects of task conflicts could be very positive.

Process Conflicts. This type occurs when people who are performing routine tasks have differences over how the team is managing the tasks and coordinating the role assignments of the members. Process conflicts often create disagreements among team members about their roles, which can devolve into relationship issues. Because of this, process conflicts often have negative effects on team member satisfaction and team performance.

Conflict Resolution Approaches. Conflict resolution approaches available to teams vary, depending on the team members’ desire to be assertive and cooperative. Because team members have generally long term relationships with one another, they should try to use a collaborative approach to conflicts whenever possible. There are five different approaches to conflict resolution: 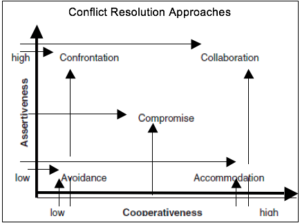